There are so many great romantic comedies available to stream online at the moment. So grab yourself a glass of wine and a blanket and get ready to make your way through our list of the best rom coms on Amazon Prime right now. We are about to highlight fifteen of the best romantic comedies available to stream on Amazon Prime right now.

What Are The 15 Best Rom Coms on Amazon Prime Right Now?

So what are the fifteen best romantic comedy movies available on Amazon Prime right now? Check out the list below for some of our favorites:

With so many options, it can be hard to determine which one to watch. Let’s take a look at some more information about these wonderful chick flicks to help you make a decision:

This move is an easy-to-watch, feel-good love story between Wallace (Daniel Radcliffe) and Chantry (Zoe Kazan). Wallace is a man with a long string of terrible relationships who strikes up a friendship instantly with Chantry.

Unfortunately, he soon discovers that Chantry lives with her long-term boyfriend. Since Chantry is unfortunately taken, the pair decide to try and figure out how to become best friends as soul mates.

Being friends can often be harder than being in a relationship, and this movie dares to question “What if they are always meant to be just friends?”.

This movie delves into the question of whether or not someone can have a “friend with benefits.”

Everyone knows that becoming friends with benefits after just being friends is very complicated. Adam (Ashton Kutcher) and Emma (Natalie Portman) have been friends since they were younger and almost ruin everything by having sex.

However, they quite like the idea of just having sex due to their busy schedules and other commitments, so they decide to give the whole “friends with benefits” thing a go. They make an agreement that there will be nothing romantic involved, and they will simply just meet up and have sex as and when they want, but they’re not allowed to fall in love.

As you can expect, things don’t quite go to plan.

The plot to this movie is predictable right from the start, but that doesn’t matter because the way it gets there is both hilariously funny and sweet.

The main character Alex’ Hitch’ Hitchens (Will Smith), is a relationship guru who helps men land the woman of their dreams. While he’s helping an almost hopeless client build up the confidence to pursue his ideal woman, he ends up also falling in love himself.

It’s a typical chick flick with plenty of ups and downs, and it’s extremely entertaining from start to finish.

This British rom-com is an absolute classic that can be watched time and time again.

The storyline follows a group of friends as they venture through the ups and downs of love, heartbreak, and drama at various social events.

Although the film was made on a tight budget, it was a surprisingly big hit at the box office. This fun and witty British romantic comedy are considered to be one of the best British movies ever made, despite receiving negative remarks from critics.

Two women who have recently been cheated on decide to try out a little experiment in the run-up to Christmas – They swap homes for the holidays. While one of them resides in a quaint little cottage in England, the other has a giant fancy home in Los Angeles.

While enjoying their time away at each other’s homes, they both meet new men who sweep them off their feet.

Despite receiving mixed reviews, this movie is a heartfelt and sweet romantic comedy that is perfect for watching as the holiday season draws closer.

This is a very sweet rom cam about always believing in yourself. The main character, played by Jay Baruchel, stars as an everyday guy who starts dating a stunningly beautiful woman and almost allows his own insecurities ruin the whole relationship.

His lack of confidence and the influence of his friends and family makes him question why she chooses to be with him, and this results in a lot of ups and downs in the relationship. It’s a very funny movie with a lot of relatable comedy thrown in.

If you’re looking for something light-hearted and funny, She’s Out of My League is a great choice.

This movie explores something that may seem very familiar in the current age of lockdowns and quarantine. A couple who meet online end up trapped in a small apartment together for a lot longer than they expected after a blizzard hits the morning after their one-night stand.

As you can imagine, it’s a little bit awkward to be trapped with someone you barely know, the make it work.

The chemistry between the pair is evident from the start, and this is what keeps the movie going: plenty of banter and steamy love scenes and a very convincing bond between the characters, which keeps you rooting for them throughout the entire movie.

A classic romantic comedy that you can re-watch over and over. After the main character, Sam’s wife, dies, he moves to Seattle with his son, Jonah. Still heartbroken over the death of his wife, Sam’s son decides to call up a radio program to find his father a new wife. Sam then reluctantly gets on board and talks on the radio show about his feelings.

A reporter from Baltimore hears Sam’s story and instantly falls for him, despite being engaged herself. Unsure of what will come, she writes to Sam asking him to meet her at the Empire State Building on Valentine’s Day.

The romance in this movie is top-notch, and this is definitely one that you can get cozy under a blanket and watch with a warm fuzzy feeling.

Jillian Bell stars in this movie as an overweight woman who sets out to train for the New York marathon. She believes that if she can get in shape and accomplish this, she can change her life for the better.

However, what she finds is that these changes can be negative as well as positive. She realizes that a lot of her issues are down to who she is as a person rather than down to the way she looks.

This movie represents a nice balance between romance, drama, and comedy, and it’s a sweet reminder to the audience that you can’t progress in life if you don’t learn to love yourself first.

This is not your typical type of rom-com. The movie takes you on a beautiful journey through Paris. A screenwriter named Gil (Owen Wilson) is transported back in time, and he is then confronted with the concept that his relationship with his fiancé isn’t right for him.

During his time in Paris, Gil takes nightly walks at midnight to spark inspiration for his next novel, but he finds that his daily walks make him fall in love with the city more but take him further away from the woman that he is about to marry.

The movie won the Oscar for Best Original Screenplay and was nominated for three Academy Awards. If you’re looking for something a little bit different than your typical rom-com, this is the movie for you!

While Nora (Kat Dennings) is desperately looking for her lost drunken friend, she bumps into Nick (Michael Cera), who is the ex of one of her friends from school.

The pair end up bonding over their similar music tastes, and this chance meeting ends up in them setting out to track down a secret concert that is being held by their favorite band.

This is a very sweet rom-com that offers a different storyline to your typical teenage chick flick. It also features a great soundtrack!

This rom-com explores themes of family troubles and self-identity. Flor is a single mother from Mexico who moves in with an upper-class American family to work for them as a nanny and housekeeper. However, when she brings her daughter along with her to move in with the family, too, things start to get a little tricky.

The story touches on a number of things, such as parenting, infidelity, alcoholism, and love. It is a story with a lot of ups and downs.

The story is narrated by the daughter, who is now older and is recalling this significant experience of her life for her Princeton University application. It’s a touching story that differs from your typical romantic comedy.

This storyline is centered around the age-old belief that opposites attract, and it also demonstrates that it’s never too late to find love. The main characters meet while in their 50s and 60s.

The male character, Harry, is a long term playboy who loves younger women and has no desire to settle down, whereas the female character, Erica, is the mother of Harry’s latest young conquest.

A huge number of unfortunate events keep bringing the pair together until they finally realize that they are in love with each other. It’s a very predictable storyline but very entertaining to watch.

This story follows Audrey Hepburn’s character, who is a princess that decides to escape her strict life and travel through Rome. While in Rome, she meets a reporter named Joe, who doesn’t realize that she is a princess and has no idea about her extravagant life.

When he figures out who she is, he begins playing games with her to try to scoop some information for his newspaper, all the while pretending that he still doesn’t know who she is.

Quite predictably, his feelings start to get in the way, and he finds himself falling in love with her. It’s a very classic old-time rom-com with a predictable but sweet storyline that’s a real treat for the audience.

This is a contemporary fairy tale that is set within beautiful gardens in London. The storyline centers around an unlikely friendship between a cranky widower and a reclusive and dreamy young woman.

Bella (Jessica Brown Findlay) dreams of writing books for children. However, when she faces being evicted because of her overgrown, neglected garden, she seeks help from her grumpy next-door neighbor (Tom Wilkinson).

They work together to completely restore the garden to the most beautiful it can be, meanwhile discovering that they share a powerful connection. It’s a fun and interesting story that is filled with plenty of drama, romance, and comedy – everything you could ask for from the perfect rom-com.

Where Else Can You Stream Romantic Comedies?

What if you want to watch a good romantic comedy, but you don’t have Amazon Prime’s streaming platform?

The most popular alternative services include Netflix and Hulu. You’ll find a huge range of additional movies on these platforms.

As you can see, there are many great romcoms available to watch on Amazon Prime, and these are just fifteen of our favorites. No matter what type of romantic comedy you’re in the mood for, we’re sure that Amazon Prime will have something that suits your movie mood.

There is no better time to curl up with a blanket and watch a cute romantic comedy movie, so why not pour yourself a glass of wine, get cozy, and make your way through this list of the best rom coms on Amazon Prime?! 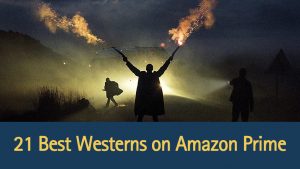